You are here: Home / Town & Country Veterinary / To Bloat and Twist the Stomach or Not

If you’ve read the book or watched the movie Marley and Me, then you probably remember the bloating scene. Bloating or worse, a GDV, Gastric Dilatation-Volvulus, affects deep-chested dogs such as German Shepherds, Great Danes, Dobermans, and Bassett Hounds. Great Danes are the number one breed for bloat and GDV. Bloat is when the stomach greatly expands in size, usually with air, but can also occur with food. This can be resolved by passing a stomach tube, administering simethicone, or a number of other ways. A GDV is when the stomach enlarges in size and then twists on itself. This cuts off the blood supply to the stomach and spleen. Because the stomach has twisted, it forms a tourniquet at each end so no air or food can escape. This is why we often see unproductive retching when it occurs. Bloat often leads to GDV. A GDV is a surgical emergency and the cost can average anywhere from $2000 to $4000. Besides tacking the stomach during surgery, part of the stomach or the entire spleen may need to be removed because of the lack of blood supply. After surgery, fatal heart arrhythmias can occur. Because of the complications that may occur with surgery, potential death of the patient, and excessive cost of the surgery and post-operative care, many people are having prophylactic gastropexy surgery performed on their large-chested dogs. 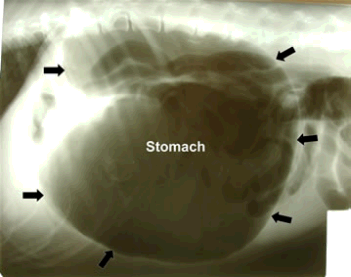 When a stomach tack is performed on a healthy stomach, the dog heals quickly and there are few complications. When a tack is performed on an unhealthy, bloated stomach, there is a greater chance for the tack to not hold or for other complications to occur. That is why I feel that electively tacking is much better than tacking after a bloat or GDV. An elective stomach tack will not prevent bloat, but it will prevent GDV. So, the stomach can still fill with air or food, but it cannot twist on itself. Since bloat often leads to GDV and bloat has a much better outcome than GDV, when bloat occurs in a tacked dog, it will have a better outcome than an un-tacked dog.

Elective stomach tacking can be done at any age, but dogs heal faster and have a quicker recovery when it is done earlier rather than later in life . When a healthy dog is tacked, the risks are the same as any procedure that requires anesthesia. Post-operative care is that of any abdominal surgery, including keeping them quiet for 10-12 days, monitoring the incision for swelling or discharge, etc. The only additional post-operative discharge instruction I give for an elective tack is to feed small frequent meals for 7-10 days after surgery. The average cost of an elective tack is $500-$800, but can it can vary greatly.

I recommend prophylactic gastropexy for all deep-chested dogs when they are spayed and neutered. While breeders usually recognize the signs of bloat or GDV quickly, many pet owners will not. It makes sense for the pet owners to have their dogs tacked while being spayed or neutered to decrease the chance of them missing the bloat/GDV and losing their dog. Also, for the breeders that spay or neuter their dogs later in life, after breeding or showing, I recommend they tack their dog at that time. Older dogs are more likely to bloat/GDV, so you decrease the risk by tacking the stomach when you spay or neuter them.

I also recommend prophylactic gastropexy for any dogs that have bloated before and were successfully decompressed with simethicone, by passing a tube, or any other way. Once you know your dog is likely to bloat, it is likely they will also get GDV. Some people choose to electively tack if they know that bloat/GDV runs in the pedigree of their dog. Another reason people choose to electively tack is if their dog easily stresses or will be traveling or showing a lot.

It’s surprising how many veterinarians do not recommend prophylactic gastropexy and how many will not perform the surgery unless they have an emergency GDV. Every breed is predisposed to something, be it eye issues, hip issues, etc. One of our big issues in the deep-chested dogs is bloat and GDV. In my mind, why not try to prevent something that could be fatal?